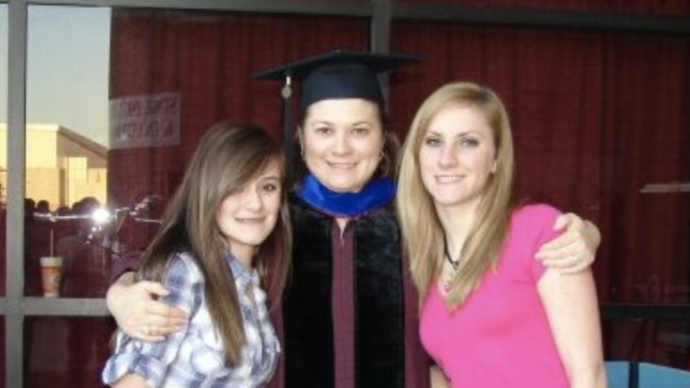 If you know me, you may know that my older child died unexpectedly after I graduated with my PhD and was on the job market. Eleven years later, I feel comfortable writing about how this event impacted my job search because I know there are others out there who are or will be in this situation–and it’s hard.

After getting my PhD, I was poised to get a faculty position. I had publications, grant writing and management experience, and experience teaching at the university. I made it to the in-person interview stage at two universities (for ease of explanation, I will refer to the universities as Uni A and Uni B). I was scheduled to practice my job talk with another job seeker via the phone when I got the call that started my nightmare of losing my child.

It was a Wednesday. I was scheduled to fly out to Uni A the upcoming Sunday for my interview. Obviously, I would not be flying out for that interview. On my behalf, my doctoral supervisor contacted Uni A to let them know what happened and that I requested a postponement of the interview. I was in shock and didn’t know what to do, but I knew I wanted to interview and get a faculty position. I had experienced the loss of both of my parents in the past, so I knew that as hard as it is, life continues, and working is a part of life. My doctoral supervisor told me that Uni A suggested I not interview, but my supervisor told them I wanted to, regardless of what happened.

I was able to postpone the first interview at Uni A, but I went ahead to Uni B’s interview as it was scheduled because it was scheduled a little farther out. While in my hotel room the evening before the full day of interviewing at Uni B began, I got a message from the job seeker who I was previously going to practice my job talk with on the day of the accident. They said they had been contacted by Uni A to come in for an in-person interview. They were not offered an in-person interview at Uni A until Uni A heard about my situation with my child’s death.

I had a good experience with the interview at Uni B. Everyone was very kind, but I could tell it was not a good fit for me or them. As sometimes happens during a faculty interview, one of the faculty members was driving me around town to show me the area. They told me how it was difficult for them to initially fit in to the community. They shared a personal story. I felt comfortable enough to reciprocate by telling them about my child dying. I will never forget their response. They said, “We know, and we’re very sorry. We didn’t say anything because it was not relevant to the interview process.” I was taken aback because I didn’t realize they knew–they were so professional during the interview.

Not long afterwards, I went to the interview at Uni A. As soon as I saw the faculty member at the airport who was picking me up, they gave me a hug. This is not typical interview behavior. It was an act of kindness from a human being, but it was not what happens during an interview. Just like any other faculty interview, I met with various people and had meals. However, the meals were with only one person. That is unusual and was another sign I was not really being considered for this position. In fact, during one of the meals, the person I was spending time with from the university let it slip that I was their first choice–before they learned of my child dying. This really hurt. I felt like I was being punished twice–first by losing my child and second by losing out on a job I felt was a good match to my skills.

I wasn’t offered either job. I know I wasn’t at my best level of performance during the interviews, but I also felt like I wasn’t really considered at Uni A because of the death of my child. Fortunately, I was able to post-doc at my PhD-granting university, which allowed my family and me to stay where we had community support. Looking back, I can see that staying put was good for my family and me, but it really hurt at the time to not get the job at Uni A. I was very fortunate to be able to do a post-doc at my degree-granting university.

I can’t remember when I applied for jobs again (but I did and was even offered a job that I declined). Truthfully, the first few years after the death of a child are very difficult (the second year was the worst for me), and I have trouble remembering some things that occurred during that time. I struggled to focus my attention. I could hardly hold my head up when I first returned to work, and I cried in my office frequently. I ended up having a gap in my publications because of this.

How would I address the gap in publications in my application materials? I knew search committees would be looking at the gap, and if I didn’t give them an explanation, they would make something up in their own minds. After the experience at Uni A, however, I didn’t want to put what happened in my application materials. I looked for guidance on this issue. I contacted The Professor is In‘s Karen Kelsky. She posted my question anonymously on her Facebook page. Some thought I should disclose. Others thought I should not disclose. I decided to discuss the issue with one of my dissertation committee members who had recently lost a close family member to a violent crime. I felt she could understand the trauma from my loss. She and I came up with this plan. I would not address the issue in my application materials. However, this faculty member, who was one of my letter of support writers and references would address the gap by noting something personal occurred but that I am back to my previous level of productivity. She would also answer questions when the search committee members called her, if they asked. In this way, the gap was addressed, but specifics about the event were not given unless pressed.

If you have experienced a traumatic event such as a death of a child, you know how people react when you tell them. Many times people are so taken aback that they say things that inadvertently hurt (e.g., “Oh, I could never survive the loss of my child!”). The conversation gets derailed, and you get hurt. By coming up with this system, the search committee would be able to know what happened, if they were wondering, but it was not put out there by me in what would look like an attempt of getting pity or making excuses. Then, if I decided to disclose during an in-person interview, the search committee would already know and would not make hurtful statements or have a shocked look on their faces. In fact, this is exactly what happened one evening during an in-person interview dinner. I mentioned that my daughter died, and the reaction from the people at the dinner was an acknowledgement. Then, the conversation continued. I ended up taking the job at that university because of their response to that information–that and the great fit!